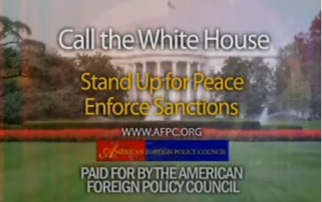 It sounds so sexy. So overwhelming. So forceful.

But, for an administration that ignored General Shinseki’s admonitions about troop requirements, it’s hard to figure what they figure will happen when they surge up to 50,000 troops into a war-torn, incessantly-bombed and now-failed state like Iraq.

Perhaps there is a logical answer to why “they” are moving ahead with a plan that most of their GOP compatriots, except McCain and Lieberman (yes, folks…Joe is a de facto Republican now) in the House and Senate refuse to endorse.

A second Carrier Task Force is steaming towards the Gulf. Submarines abound. Fly-overs being secured. Special Forces gallivanting around the Iranian countryside. A surge is coming…to fight the in-surge-ncy.

And the “Iran is behind the insurgency” mantra is being chanted in the media so often that DC is beginning to feel like an ashram.

The media buzz is all about whether we are going to attack Iran, as if it’s in question. Isn’t it strangely reminiscent of the media’s meaningless navel-gazing about questions regarding WMDs in Iraq before that attack?

No, the debate is being framed. A faux debate. The overall message is one of Iran as bad guy.

In fact, a group calling itself the American Foreign Policy Council is showing “Iran is evil” commercials during CNN broadcasts…roughly one per hour. Only in the DC area, though.

Take a look at what DC’ers are seeing everyday:

And this is the text of a similar American Foreign Policy Council ad clogging up the minutes between CNN’s live shots of apartment fires, car chases and celebrity gossip:

The nuclear clock is ticking… and time is running out.

Iran is the world’s largest state sponsor of terrorism – supporting attacks that have killed hundreds of Americans.

An Iranian group boasts 25,000 members who are ready to become suicide bombers in the US and Europe.

Now, in violation of the UN, Iran is developing a dangerous nuclear capability and has threatened to share it with others.

Stand up for peace. Call the White House and tell them to enforce sanctions against Iran today.

Check this “council” and what they are obsessed with…which reads like another Neo-Con laundry list of imperial pretexts.

What does this have to do with the surge?

The surge is a great way to get additional troops into Iraq to deal with the backlash…the oh-so predictable chaos surge that will occur once the bombs start dropping around Iran.

It is likely that many of the surged troops will be protecting the Iran-Iraq border from friendly confines of the string of permanent bases we’ve quietly, at least to the tin ears of our mainstream media, been building since day one of Operation Iraqi Liberation.

No, after reflecting on the intrinsic irony of that acronym it was re-named Operation Iraq Freedom. O.I.F.

Hey, when it comes to propaganda, a little goes a long way.

Frankly, the impending fun and games with Iran should surprise no one. Really. No one.

The groundwork has been laid since Bush’s post 9/11 State of the Union, “Axis of Evil” speech. In fact, even earlier than that.

But now we have the lives of our boys and girls on the line. The Iranians are, according to the Bush Ashram, responsible for the deaths of American troops with their sophisticated I.E.D.s, their advanced planning capabilities…all fueled by their hatred of our ability to watch American Idol, eat Cheetos and burp up aspartame sodas. Yes, it’s true…the Koran, via the Old Testament, forbids idolatry. Perhaps even American Idolatry.

So that’s why they hate us!

I guess it has nothing to do with our protectorate over the Saudis and the long-standing conflict between the Western-loving, gold-plated despotism of Saudi Arabia and the Islamic revolutionaries in Iran. A people who could not be motivated by our intervention in their democracy back in 1953. Or by the Shah’s Savak…a brutal Gestapo-type internal police force that enforced the rule of our Puppet Regime.

Nor does it have anything to do with the fact that Iraqis have been dying by the thousands since we invaded their country.

It’s not that Iraqis want us out.

It’s that Iran is using Iraq to challenge our benevolent, democratic protectorate over the Persian Gulf. To stop the Iraqi people from practicing their own form of American Idolatry.

That’s the Kool Aid…would you like ice with that?

So take this surge for what it is and realize what it isn’t. It’s a Trojan Horse solution to the amazing disarray and death we’ve unleashed in Iraq. Really, it’s a subterfuged way inside the gates of Hell…a Hell we are going to unleash on yet another country in the Middle East. It’s a protection racket for our anti-democratic, beheading-friendly and summary-executing compatriots in Saudi Arabia.

And Israel gets some dirty work done, too. It’s a two-fer!

But it isn’t going to solve the mess we call Iraq. No, it’s simply going to increase the death and destruction of Iraq as we widen the war. Iraq, alas, it as the crossroads of the Bush Ashram’s Roadmap for a New Way Forward, for a re-made Middle East.

Fire up the bulldozers, we’ve still got work to do…re-making the map of the Middle East is a multi-generational affair. The surge will help to make us the protector.

Let’s just hope the Iraqis appreciate it before it blows us all out.

'Blowing Out the Surge Protector' has no comments