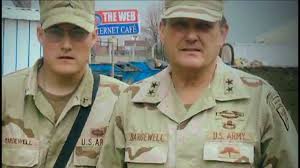 There were two massacres “in the news” this week. One, in a bucolic Virginia college town, kept the voracious, non-stop gaze of the media transfixed. Each detail described over and over again. Pictures replayed on seemingly infinite loops, the lives of victims explored and celebrated. The human cost considered and the inhumanity of random killing pondered as the massacre became a cultural obsession. The other? Haditha. This week Maj. Gen. Eldon A. Bargewell issued a 104-page report on the 2005 massacre in a worn-torn Iraqi town that took 24 civilian lives. In it, Bargewell excoriated the chain of command for ignoring the misconduct that lead a group of Marines to inflict deadly vengeance upon innocent civilians in response to a roadside bombing by insurgents. An example of the fog of war, perhaps? The grayness that colors the interaction between and occupying force and the people they were sent to “liberate.” Or that mind-shattering experience we know so well from Vietnam Veterans…inconclusive lines between friend and foe created by guerrilla tactics, a language barrier and a civil war? Or just an example of the inhumanity of forcible occupation without moral justification? Key questions our media and culture must engage as we stumble down the road to empire and ponder the mounting human cost of a global war on “Terror.” However, while the media focused on the sort of mentality–the mental illness, in fact–that leads an individual to kill without conscience, the report on Haditha was basically ignored. A report that, while predictably denying any real cover-up by the Pentagon, is punctuated by some startling statements by the career officer in charge of the investigation. According to Maj. Gen. Bargewell: “All levels of command tended to view civilian casualties, even in significant numbers, as routine and as the natural and intended result of insurgent tactics.” …and… “Statements made by the chain of command during interviews for this investigation, taken as a whole, suggest that Iraqi civilian lives are not as important as U.S. lives, their deaths are just the cost of doing business, and that the Marines need to get ‘the job done’ no matter what it takes.” So, as we consider the value of human lives lost in Virginia shouldn’t…couldn’t we…also consider the value of human life in Iraq? What of the over 650,000 Iraqi casualties since the invasion? The Pentagon and the White House dismiss these numbers, for obvious reasons. Perhaps for the same reasons they forbade hospitals in the newly “liberated” Iraq from counting the casualties they encountered. Or what about the nearly 4 million Iraqis who have lost or fled their homes since the invasion? Perhaps the size of the numbers is the problem. Too big, too hard to comprehend. They are simply statistics, not individuals. 32 people killed in Blacksburg. It’s a staggering number, but still manageable in the media’s mind. Pictures can be shown, the lives understood. They are people…human beings with obvious value to their families, friends and their communities. But then isn’t 24 a manageable number, too? Yes, the story was basically told when the “not-really-a-cover-up” was exposed. Still, it doesn’t seem that the lives of those Iraqis…whether men, women or children…hold the same value for us and our media. Just as they don’t, according to the report, for the Marines in charge of democratizing them. Although, to be fair, the Department of Defense has goen to the trouble of ascertaining the actual “value” of individual Iraqis. In yet another report that was basically ignored, the ACLU pried loose documents from the Army that revealed Iraqis, and their co-liberatees in Afghanistan, “have received more than $32 million in compensation from the Army for noncombat-related killings, injuries and property damage.” The devilish details from the report show just how cheap life is in Iraq.

And in Haditha? Various residents of the town received a total of $38,000. Life, it would seem does have some value in Iraq. A monetary value. Yet, wouldn’t we find it strange…even distasteful…if the parents of the Virginia Tech killer offered each of the victims’ family $2,500? Wouldn’t it be dehumanizing to put a price–and a paltry price, at that–on the humanity each of their loved one’s exhibited over the years, on the relationships and affectations that made them who they were? It’s all part of a bizarre numbers game. Those brutally massacred in Haditha are, like the tens of thousands of Iraqis who seen their lives inexorably changed or summarily lost, merely statistics. Reports are issued, money is paid. The victims in Blacksburg deserve all the humanity we can muster…in condolences and outrage and tributes. But during a week in which we grappled with the consequences of random murder, what does it mean that we so easily glossed over the reports on Haditha, on the millions of refugees and hundreds of thousands of casualties? The numbers coming out of Iraq are not abstractions…not to Iraqis. But then again, the media would never rest if they tried to deal with those murders as more than just numbers. It just too big…which also says something about our role in Iraq, doesn’t it?