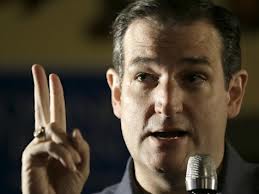 Senator Ted Cruz has some peculiar ideas about history.

And the newly-elected Tea Party darling from Texas didn’t bother to mince his words or ideas during confirmation hearings for former Senator and GOP gadfly Chuck Hagel.

Although, he did mince Hagel’s words. But that was all to emphasize what Ted obviously regarded as a teachable moment.

Crimes against a group or people can be put into an “historical wrongs bank account” and, on an ad hoc basis, those wrongs can be withdrawn and used to justify wrongs against anyone at any time in perpetuity.

The freshman Senator used Hagel’s appearance on, as he put it, a “foreign network broadcasting propaganda to nations that are hostile to us” to make it clear that this bank account not only exists, but that it is a travesty to imply otherwise.

The “foreign network” is, of course, the perennial boogeyman—Al Jazeera. The discussion, hosted by Riz Khan, was about the reduction of nuclear weapons around the world. Ted Cruz’s key point centered on Hagel’s supposed response to a caller who asked why war crimes in one place are pursued—Sudan, while war crimes in another are not—Israel. Riz Khan asked the caller to get back to the point of nuclear disarmament. The caller did and then made a point regarding the need for leadership. Hagel concurred.

But Ted heard something more. Or less. A lot less.

In fact, Ted cannot believe that he heard nothing at all! Said the Senator to his quarry, “The caller suggests that the nation of Israel has committed war crimes, and your response to that was not to dispute that characterization.”

Hagel didn’t condemn the caller’s implication that war crimes have occurred in the Occupied Territories against Palestinians. See? Gotcha!

But the real zinger followed, because Ted found the caller’s war crimes claim “particularly offensive given that the Jewish people suffered under the most horrific war crimes in the Holocaust.”

In other words, the simple fact of the monumental injustice suffered by European Jews under the crushing weight of Nazism and European anti-Semitism is, in and of itself, an historical “get out of jail free card” for anything and everything done by Israel in the Occupied Territories, or during its periodic invasions of Lebanon, or anything that the “the people” may do.

This is a teachable moment, Ted. This is exactly how history gets weaponized.

This is why the Japanese were interned in World War II, their property and wealth often absconded and their legal standing revoked. Pearl Harbor justified what is, in retrospect, tantamount to a war crime.

This is why the United States remains outside the International Criminal Court, because a laundry list of post-9/11 abuses—from Gitmo and rendition to Abu Ghraib and the massacre at Haditha and onto “Double Tap” drone strikes of rescue workers—exposes the leadership of the United States to criminal prosecution for crimes against thousands upon thousands of people who had nothing to do with 9/11.

The historical justification of 9/11 and “terrorism” makes all things possible.

And, in the mind of Ted Cruz, what German Nazis and their European collaborators did to European Jews makes it impossible to even consider as any wrongdoing in the slow-motion ethnic cleansing of the settlement process in occupied territories, the imprisonment of children, the death of civilians and children in periodic bombing campaigns, the creation of a de facto prison camp in Gaza or the forcible sterilization of Ethiopians.

According to Ted, one man’s war crimes are another man’s tough historical luck. But the blade cuts both ways, Ted. Couldn’t those around the world who’ve suffered under American power also feel that they have brimming bank accounts of historical injustice, ready to spend in perpetuity?

Central America, Southeast Asia, Iraq, Pakistan and even Iran. They all have historical cases to make against the United States and the war crimes they endured under the weight of U.S. power or the power of its proxies.

How about right here at home? Does the unbelievable brutality of slavery or the grinding genocide of the American Indian also offer them free passes?

Alas, Senator Cruz plays fast and loose with his weaponized version of history.

And that’s the blade that truly cuts both ways.

Which is exactly why six former chiefs of Israel’s internal security service—Shin Bet—have come out to criticize the Israeli occupation in the film “The Gatekeepers.”

They see the future of Israel imperiled by the occupation and by policies that have marginalized Palestinians in their own land. Avraham Shalom, an Austrian-born Jew who fled the Nazis, went so far as to compare Israel’s current occupation to Germany’s occupation of Europe. As Israeli filmmaker Dror Moreh said to CNN, “Bear in mind that Avraham Shalom was born in Vienna…and at the Kristallnacht he was forced by his mother to go to school and was beaten almost to death by his classmates.”

Shalom said to Moreh, “I experienced firsthand what it means to be under a racist regime.”

And, right or wrong, Palestinians are putting all that real and perceived injustice into a weaponized bank account of their own.

And so goes the deadly cycle.

Before Senator Cruz once again wields his half-cocked, weaponized history theory, he needs to take a closer look at history itself. It is an ongoing warning to those who are tempted to use history as a justification for injustice.