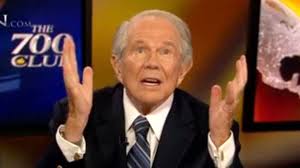 One of America’s most reliable Evangelical quote machines spit out another doozie.

The Reverend Pat Robertson once again called on his unusual insight into all things meteorological to determine God’s weather-making plans. This time, God slammed the Eastern Seaboard with a huge snowstorm because he wanted to keep people from driving to Gay activities.

In fact, Pat said, God shut down New York’s airports “so that people who were hoping to fly to do something of a Gay nature would have to take a train or a bus, so it might be days before the Gay thing they were going to do could occur.”

Is, in essence, Pat Roberson saying that God actively advocates the use of public transportation? Wait a minute! Did Pat just unintentionally out himself as a…closeted Green? Does he see a link between God, the weather and use of fossil fuels?

Is God using his favorite stand-in’s TV show to tell us that he wants Gays to be carbon neutral?

Nah. That’s too good to be true. Like this “story” by comedian Andy Borowitz.

Heck, he isn’t complicated enough to be a closeted Green. And he certainly isn’t clever enough to be intentionally ironical. In fact, he seems to be more and more out of touch with reality each time he blithely connects weather systems and homosexuality. His claims are so laughable that it’s…laughable.

Unfortunately, this comical zinger points out very real problem and the a huge plank stuck firmly in the eye of American Evangelical Christianity.

The rantings and ravings of people like Pat Robertson, along with the religious and political movement he once led, sit there like a half-solved, religiously-themed crossword puzzle. It’s confounding. The puzzle will never be solved because two wrong answers scribbled in a few entries ago have led the whole thing to be rendered incomprehensible. For many of us who were raised Christian, or even became Evangelicals, that’s what contemporary Christianity is—a puzzle. It all stems from a notable disconnect between the Bible we studied hour upon hour and the language and actions that now pass for Christianity.

The teachings of the Prince of Peace factor little in the hyperbole coming from the most prominent pulpits. Peace is rarely evoked by openly Evangelical politicians. Oddly, they are often the first to advocate war. For many, turning the other cheek now means putting the rifle butt on the other side of your face. Judgments, once the provenance of the Almighty, are dispensed with increasing regularity by stone throwing glaziers.

How did they come to these strange beliefs?

Well, a close reading of the red bits shows us a Jesus who doesn’t seem to care about the activities of homosexuals. He never says he hates them. Ever. He certainly doesn’t say he’s out to punish them or the countries they live in. The “red bits Jesus” also seems to be critical of the wealthy. And he seems to be sympathetic toward the poor. But wait, there’s more! He champions the sick and the weak and those being exploited by their employers.

If, for example, you open up the Book of Matthew and read the red bits, you get a totally different Jesus than the Jesus promoted by Pat and Co. The versions are so different it seems as if Jesus “followed” by Pat and Co. is actually a strange, alternate dimension Jesus—like Spock with a beard or Bizarro Superman.

Or, it just may be that many of the people who claim to be followers of Jesus actually read everything else but the red bits.

If Pat was reading the red bits on a regular basis, he might claim that snowstorms and hurricanes are God’s way of punishing us for not taking care of the sick, visiting prisoners, or feeding the poor and hungry. Or that the Almighty is angry at us for worshiping mammon, money-changers and the rich. Heck, if a rich man has a better chance of passing through the eye of a needle than of getting into Heaven…one wonders if Pat is going to be an odd man out come Judgment Day.

Did he think about that when he hustled his diamond mining interests in Africa? Or all the times he advocated for-profit healthcare and cuts in social assistance programs for indigents and the elderly. How about the many times he has promoted tax-cuts for wealthy people like himself?

Can he and the millions like him actually match their words and deeds with the red bits that color the New Testament?

He is not alone, though, and there are those willing to take it much further than the weather map. Thankfully, the folks at Westboro Baptist Church decided to pull the plug on their plans to picket the funerals of those killed in Tucson. Famous for showing up at military funerals with their “God Hates Fags” signs and for tossing epithets at those mourning the loss of a son, daughter, husband or wife, these Christians don’t see red at all. And they obviously missed these red bits: “Blessed are they who mourn, for they will be comforted.”

Rather, they’ve marked out their particular truth in ugly hues of black and white. Apparently, the deaths of soldiers and those of the bystanders in Tucson are part of God’s plan to punish us for allowing homosexuals to…live. To exist at all.

Their version of God’s plan, though, got sidetracked by a better offer. A Phoenix-based radio host used the promise of 30 minutes of airtime as a sort of prisoner exchange with the Westboro bunch. They got the airtime and, in trade, they freed the families they held hostage with their threat of protest. The families can now freely mourn without the picketers nearby, screeching out the word “hate” over and over again.

But one hostage remains. Jesus is still being held without bail.

That’s the reality of contemporary Christianity. Evangelicals are currently holding Jesus hostage within a prison built of Old Testament brimstone, ringed with a wall of judgmental fire. The blackness of their words stands in stark contrast to the red bits so many of us read in Sunday school, Wednesday night bible study or in reflective times of need. The Sermon on the Mount. The Beatitudes. The entirety of Matthew, Chapter 25.

Radical pronouncements of a radical thinker written in vibrant red.

It’s hard to imagine Jesus, a man who openly and scandalously washed the feet of a prostitute, being embraced today by many of his own followers. Perhaps it is why so many others of us have walked away from the crowd and from the colorless monotheism they espouse.

'The Red Bits' have 3 comments