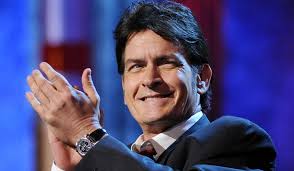 Our ever-vigilant news media cannot stop reporting on the war. Each day, journalists engage us with in-depth, hour-long explorations of every facet of the war. Tireless reporters report on location about the war’s smallest details and the war’s mounting causalities. Despite cynicism about the indifference of the American public, all that relentless attention has got the whole country talking about the war.

No, not that war.

The news media is obsessing on “Charlie’s War,” as in Charlie Sheen’s “war” against…something. Against sitcoms. Against sobriety. Against self-important talking heads choking on dead air in between commercial breaks. Whatever and wherever the battle might be, you can bet that the media will be there in the trenches to cover it. And yes, MSNBC officially branded the whole sordid Sheen side-show…“Charlie’s War.” Martin Bashir spoke in somber tones about the day’s latest developments in “Charlie’s War.” Like any war, they’ve done it up right, complete with a snazzy graphic.

And it worked. We’ve become entranced by this misdirected “war coverage.”  You see, we were too busy watching Charlie’s War to notice a week’s worth of deaths in the other war—Afghanistan.

It seems inevitable that the celebrity-obsessed tastemakers currently languishing in cable newsrooms would find a way to conflate the meaningless rantings and ravings of an actor with something as dire and transcendent as war. Their ill-informed use of language marginalizes the true cost and sacrifice of “war” until the reality of it all is diluted beyond recognition. Language matters, except to those who peddle it on TV.

Meanwhile, the longest actual war in US history grinds on in some dark backroom of our collective consciousness while the “struggles” of celebrities—the pregnancies and DUIs and affairs and breakups—take center stage in the carnival freak show we call “the news.” Nothing matters more to news producers than the personal “wars” waged by celebrities. Just so long as it is new and fresh, it is news. They don’t seem to care about the “s” tacked onto the end of the “new.” In today’s “new media,” yesterday’s “news media” is just that…so yesterday. Like, Afghanistan’s War doesn’t even have two million followers on Twitter! Who cares about a decade-old story, anyway?

Afghanistan’s War is so yesterday.

Is it a denial mechanism? Are the media and, by extension, all of us simply unable to process the real war? Or is it purely pornographic, with profiteering purveyors of anything that sells simply upping the ante to meet the demands of viewers increasingly jaded by a decade of rubbernecking to see one human train wreck after another?

Either way, the deaths of Staff Sgt. Chauncy Mays, Spc. Christopher Stark and Spc. Rudolf Hizon simply did not warrant the same incessant attention focused on the death of Charlie’s banal, mean-spirited sitcom. The controversy-conscious media didn’t even exploit the death of an almost openly Gay soldier from Minnesota. You’d think they’d see plenty for their talking heads to yell about, either pro or con, in his poignant death for a country that refuses to afford him some of the same rights as his straight comrades.

While the Senate finally voted to repeal it in the military, “Don’t Ask-Don’t Tell” continues to describe the media’s cursory coverage of Afghanistan’s War.

They just lived and died…collaterally.

In a peculiar irony, Charlie Sheen is, essentially, the living embodiment of the war in Afghanistan. He drones on endlessly about “winning” even though he looks like a loser. Drugs make up a large part of his personal economy. He hurts, whether intentionally or collaterally, those around him. Every now and then he has to apologize. In fact, he endangers children. His addictions led him into uncharted territory. He’s deeply committed to his “war,” but doesn’t seem to have an exit strategy. Outwardly, he seems purposeless and rudderless while there is, in fact, a financial method behind all that cognitive madness. Apparently, his continued dysfunction further enriches his enablers.

And, as Afghanistan’s dysfunction persists in the background, let there be no doubt…money is the root of both wars.

Al Qaeda is neutered down to less than 100 active members. It seems that the Houdini of Jihad—Osama bin Hiding for a Long Time—will never, ever be captured. Who knows if he’s even dead or alive? No, the reason behind the apparent lack of reason is geopolitics. It’s the oil and gas reserves of the Caspian Sea and our infamous addiction to oil. The war is about the encirclement of Iran and their key position at the mouth of the world’s most profitable shipping lane. Add the need to counter Russian power in the “Stans” north of Afghanistan and to support Saudi power in the Gulf. It’s all part of the “great game.”

But it is even more immediate and banal than grand strategies, because there is defense contract gold in them-thar hills…particularly those on the border with Pakistan. The Great Global War keeps the defense budget fat and the weapons industry happy. Invest in the makers of high-flying drones. Those will be profitable for a long, long time. And remember all those Bush-connected contractors who teemed all over Iraq? They’ve headed for the security gold rush of a failed state with a weak government in a strategic location.

Afghanistan’s War will outlive Charlie’s War by many years. Many more soldiers will die. More drones will drop expensive bombs on unwitting civilians. And the thorn of American empire will remain stuck in the paw of a starving lion who simply wants us out of his den. People don’t like invaders. It’s a story as old and out-dated as those archaic “traditional media” ideas about journalism and what is or isn’t news.

Luckily for the “news” media, their synergistic partners in the entertainment divisions of all those far-reaching media corporations refuse to sit by idly while their Charlie du jour goes cold. They’ve got a humming celebrity factory churning out new reality “stars” and re-packaging has-beens who will, as surely as the sun will rise tomorrow, self-destruct right before the hungry camera eyes of carnivorous cable news crews. In Fifteen Minute America, fame-seeking personalities will say almost anything to talk show hosts to cross-promote themselves and sustain their marketability. The news media never had it easier.

Celebrity is the new war. It is the big story. The epic drama. Fame and personality are cheap to produce and profitable to sell. And unfortunately for those left to toil away at an elusive objective in its unwelcoming terrain, Afghanistan’s fifteen minutes are up.

'The Global War on Celebrity' have 4 comments