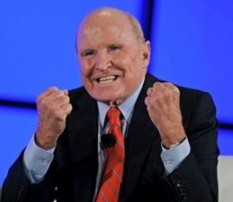 Jack Welch opened his big mouth and a can of worms.

If you’ve read his self-satisfied book “Winning,” you might not think there is much difference between the two. One thing is for certain, Jack is a lot like the other media-seeking apostle of “winning”— Charlie Sheen.

Oh, how they both crave attention.

So, Jack won. His conspiracy tweet on the most recent jobs report by the Bureau of Labor Statistics kept the blatherati of the political media occupied for nearly three and a half news cycles! They’ve pondered, debated, defended and excoriated. Jack’s wild goose was golden to cable news. Debating opinions and playing ping-pong with facts—that’s their ticket.

The books don’t need to be cooked. The fallacy of the jobs report is already baked into the cake—and it has been for decades. That’s why the sharper tools in the Fourth Estate’s shed came up with the “real” unemployment rate. That rate also counts people who gave up looking for work and people with part-time jobs desperately seeking full-time employment. While the BLS number fell to 7.8%, the “real” rate is closer to 15%. Heck, it may even be higher.

Unfortunately, these are merely facts. Ari Melber recently announced on MSNBC that “facts are the new spin!” At once refreshing and terrifying, his statement offers an insight into why facts remain the one perennial loser in the back and forth of post-Modern American politics. People just don’t trust the facts.

And why should they?

America has been a parade of secrets and lies, something we should all keep in mind as we scoff at Tea Partiers, right-wing conspiracy mongers and those media creatures from that mysterious black lagoon located somewhere outside of Area 51.

We can talk cavalierly about the “paranoid style in American politics,” but just beyond the Birthers and latter-day Red Scarecrows who populate the Tea Party and Rep. Allen West’s townhall meetings, there is a deeper, darker secret that we all basically know and lament.

The truth is out there. Just like, as we were told, the WMDs of Iraq were “out there.”

And therein “lies” the problem.

Lies that led to Iraq. Lies that tarnished us with the blood of rendition and torture and invasion and occupation. Lies that dislodged millions of Iraqis and fed us an intentionally imprecise count of civilian deaths. Lies told directly to our faces at the UN, lies packed into a scary vial of anthrax, and lies crafted into a marketing campaign described by Chief of Staff Andrew Card as a product rollout. Lies that cost taxpayers billions upon billions of dollars, all passing through the way station of imperialism into the coffers of intimately connected contractors and con-men.

Lies that cost American men and women their lives.

It is easy to point out the incipient racism, the intolerable loudness of FOX News, the intolerable existence of Rush Limbaugh and, quite frankly, plain and simple intolerance as the root causes of all these weird conspiracy theories and bizarre attacks on the President as a Commie, Socialist, Muslim, wannabe Caliph and extraterrestrial interloper from Planet X.

Well, perhaps not “alien interloper,” unless there is a Planet Malcolm X that NASA is hiding from us!

No, this paranoia has been brewing for quite some time. It’s wrapped in a deeply-seated suspicion that everyone and everything is calculated, manipulated and packaged for some ulterior political and financial motive. And based on Enron and Halliburton and Blackwater—along with Mission Accomplished and the widespread belief that Saddam was part of 9/11—why wouldn’t people be suspicious?

Obama didn’t just inherit the Oval Office, he inherited years and decades of secrets and lies that have eroded the public’s trust. His own policy of secrecy, his warrantless wiretapping, his refusal to confirm or deny a growing drone war, his push for the power of indefinite detention of American citizens and his cozy companionship with Wall Street-walkers like Timothy Geithner, Jamie Dimon and, not coincidentally, Jack Welch’s successor Jeffrey Immelt, only cause a familiar refrain from The Who to play over and over in our heads: “Meet the new boss; Same as the old boss.”

The refrain is not unfounded.

After Monicagate averted our eyes from bombs dropping on the Balkans and Baghdad, the media replaced the quaint process of “news gathering” with perpetual debates over everything. Literally. Every wire story, every fact, every gaffe is instantly transformed into a media-blitzed battle between two or more megaphone-wielding mega-phoneys. Is it any surprise that trust of the media is at an all-time low?

Many believe, with good reason, that two of the last three presidential elections were essentially stolen. It is any surprise that the Tea Party came up with its own “Birtherism” twist on the “stolen election”?

Simply say the word “Diebold” and you’ll be hard-pressed to find someone not on their payroll who’s willing to defend voting machines that can be hacked with the all the ease of channel surfing on your Barcalounger.

Try “bankers” or “banking bailout” on a few people and see how that goes over—like the Hindenburg. The revolving door spins and spins between the Fed, the Treasury Department and Wall Street, no matter which party occupies the White House. Follow the money; it’s easier than you think.

The term “October Surprise” has, perhaps not surprisingly, entered the media’s lexicon as an accepted political possibility in this Neo-Con-game of post-Reagan America.

And Iraq. Americans’ trust has been collaterally damaged by Iraq. The body politic has PTSD and it’s easily triggered. Think of how often we’ve seen it lash out during this election cycle.

His little tweet will keep on chirping like a canary in the noxious coalmine of American distrust—of politicians, of their government and of the media—until we finally come to grips with the secrets and lies of PsyOp America.