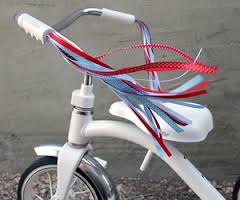 Someone very smart once said, “Your labels are your handles.”

And the country easier to steer.

Like the shiny handlebar of a child’s bike, our political culture is adorned with two tassels…red on one side and blue on the other. For the moneyed elites who run this country, getting what they want is as easy as riding a bike. They make sharp turns to the right and veer a little to the left. But, all the while, they keep peddling exactly where they want to go—directly to the bank.

It is no coincidence that the gaping gap between the super-rich and everyone else has widened at the same time the rift between Red States and Blue States has grown. Instead of the ever-more relevant distinction between “rich” and “poor,” the political-media complex profits from emphasizing the woefully binary, two-party paradigm that serves them so well. Political salespeople feed us a steady diet of re-heated arguments, each advocating that you buy their brand. And you are what you buy. You are either Red or Blue. A one or a zero. With us or against us.

The more we identify with this binary system of ones and zeroes, the more the financial class is able to play their zero-sum game. They get the sums, and we get the zeroes.

The greedy hands of the top 1% grab us by those Red and Blue handles and turn us against each other in order to keep us from turning against them. It’s all just public relations to the power people who shuttle to the nation’s capital on private jets, eager to grease the palms that pull our strings…and tug on our tassels.

Forget Red and Blue…their true allegiance is to green. And each successive election cycle sucks more and more money into the coffers of their vibrant, growth-oriented political industry. This coming year, the President plans on raising a billion dollars for his re-election. The GOP will try to match it. Where does that money go? To advertising-hungry TV stations, well-heeled consulting firms, pandering pollsters and the manipulative lobbyists who live in the recession-proof economy of Washington, D.C.

When you get down to the bottom line, it’s all about the bottom line. The two parties, the media and the wealthy people who own them both, all profit greatly from perpetuating this epic dog and pony show that distracts us from the real “us vs. them”—the brutal class war that has raged for three decades.

It’s ironic that, in this land of labels, we have such a hard time with economic class. Despite the facts and figures, many of the poor and working poor still call themselves “Middle Class.” Oddly, so do many of the wealthy. Yet, the actual Middle Class shrinks every year. It doesn’t seem to matter who is in control, whether Republican or Democrat. They organize us around fiery “hot-button” issues, but, from Reagan to Clinton and from Bush to Obama, they’ve held the line on key economic policies: tax gifts for the rich and subsidies for corporations; outsourcing and globalization; deregulation and bailouts for Wall Street; and Alan Greenspan’s maddening method of using the Fed to enrich the rich.

Meanwhile, the more we hate the stance of the other side, the more likely we are to accept less from our own party. Even as we find it harder to vote for someone, they know, at the very least, we will readily vote against someone. Despite President Obama’s broken promises and concessions to the power of Wall Street, his team knows that the Blue People have no choice…they will vote to keep the Red People from winning. The same goes for the other side, where the Red People reliably vote against their own economic self-interest due to a variety of social fears and moral judgments…anything to keep the Blue People from winning.

You see, they have us…handled.

And it’s only getting worse. We increasingly mimic the babbling heads by actively slapping labels on each other. Patriots and traitors. Fascists and Socialists. Pro and Anti. The Tea Baggers sling ill-informed epithets like “socialist.” So, the Left uses “idiot” as the go-to response to the loud ignorance of their fellow Americans. It’s an angry reaction to the long-manipulated Right’s seething, self-satisfied claims of moral superiority.

Calling each other names offers a visceral satisfaction. But saying “they started it” does nothing to bridge the growing gap between us. Rather, these identifications keep the body politic marching to the two-party tune of the moneyed elite. So long as we obey the orders—“left, right…left, right…left, right”—we present little threat to their rarified position or to their unique power to spill the blood and hoard the treasure of both this country and of the empire they’ve built around it.

The more we are divided, the more they can conquer.

Rejection is our last resort. When we look at the bottom line, at the empire that is draining our treasury and the sacrosanct economic policies both parties refuse to transgress, we see that we must stop playing into their hands. We have to stop letting fear of Red or Blue line the pockets of the rich with green. It’s hard. It’s hard to stop fighting.

Another smart person once said, “A house divided against itself cannot stand.” We know what that led to, right?

Don’t wait for the civil war or for other side to change. Make a start by ending your part of the cycle. Give your money to a “third” party. Money talks, so speak up. Give your vote to a “message candidate” outside of the zero-sum game of the two parties. Start looking for alternatives and support them. Don’t expect different results from pulling the same lever…over and over again. And stop playing the media’s predictable game of “I’m rubber, you’re glue.”

Why? Because the two-party system wants to keep its grip on our handles. If we reject their labels, perhaps they’ll lose their grip and, eventually, lose their power.

America must give up the empire abroad and end the class war at home. To get there, we must first reject the two-party system and the language of political division that is doing little more than making us all either red or blue in the face.