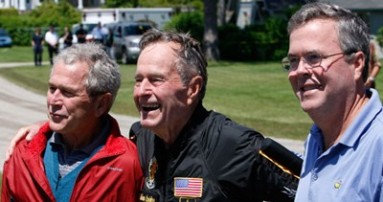 Nowadays, it’s awfully expensive to get all your baggage onto an airliner.

Unless your name is Bush and the plane is Air Force One.

In fact, the mainstream media has a long history of bending over backwards to help handle the Bush family’s substantial pile of baggage. Like a team of personal skycaps, they’ve dutifully stored it in the deep, dark memory hole we call “the past.”

Perhaps that is why Jeb “the Smart One” Bush expressed the utmost confidence that, despite a rather disastrous eight years under Brother George, he wouldn’t be weighed down by the Bush name if or when he makes a run at the White House.

No doubt, Jeb is counting on the media to handle the baggage.

Nothing seemed to stick in 2004, either. The only carry-on allowed by the gatekeepers was George’s proclamation that he answered to a “higher father,” which wasn’t really considered “baggage” by his God-fearing base of support in Red State America.

But those were just George’s “personal belongings.”

The family’s brimming baggage cart didn’t impede his ascent, nor has it troubled those who came before him.

Long-serving Senator Prescott Bush suffered no ill-effects for his role in the Union Banking Corporation, which was hit by Henry Morgenthau in 1942 for violating the Trading with the Enemy Act.

His son, the weepy, genial patriarch of the Bush clan—GHW “Poppy” Bush—never seemed weighed down by his own long, strange trip through the Cold War. Poppy is the Whack-a-Mole of post-WWII fun and games. His name “pops up” in the Bay of Pigs, the United Fruit Company, the Kennedy assassination and the assassination of Orlando Letelier, Watergate, the October Surprise, Iran-Contra, a POW-MIA cover-up, the illegal arming of Saddam’s Iraq and, most telling of all, as CIA director for less than a year.

In 1988, “the Company” broke with its “do not confirm or deny” policy to vociferously deny Poppy was ever a spook. Oddly enough, CIA headquarters in Langley would eventually be re-named “The George Bush Center for Intelligence.”

No one questioned it. Go figure.

This is exactly why it made sense for Jeb Bush to begin his nascent run for president at the Reagan Library. Really, that “library” is America’s ultimate baggage carousel. We wait and wait for the hard truths and bitter realities of Reagan’s Presidency to pop up. But, like a bad airline experience, the carousel just spins and spins—and the baggage is never delivered. 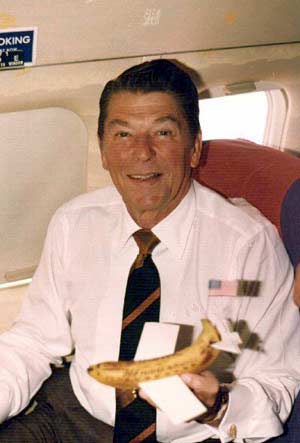 Yet, people keep on buying tickets on “Air Ronnie.”

Like the re-naming of CIA headquarters, perhaps it is no accident that Washington, D.C.’s airport was re-christened “Ronald Reagan National Airport.”

Iran-Contra, the Savings and Loan Scandal, massive deficits, Central American death squads, the October Surprise, a racially-biased War on Drugs, homelessness, the AIDS crisis—all that baggage has been mostly lost down the memory hole. As time passes and memory fades, Reagan’s approval ratings soar above 70%.

Even Democrats feel the need to occasionally bow with approbation at the political prowess of the Great Gipper in the sky.

And many of Reagan’s more nefarious lieutenants—Elliott Abrams, John Negroponte, Michael Ledeen, Richard Perle and a host of others—not only survived, but later thrived under Jeb’s brother.

As Jeb checks his “Bush baggage” in advance of 2016, the load must seem a bit lighter.

Already, his brother’s team is largely rehabilitated. Condi Rice is widely hailed as a rising star. Imagine her on a ticket with Jeb! Dick Cheney commands attention with little scrutiny. Most of Team Bush landed on their feet—in think tanks and onto corporate boards or in the media.

As we approach the 10th anniversary of “the war formerly known as Iraq,” the media focuses more on Brother George painting 50 dogs than on the relentless suffering and carnage both he and, by extension, we all left behind in Iraq. Too bad he didn’t literally “paint 50 dogs.” The media might actually obsess on that story. They sure as shootin’ don’t want anything to do with covering the chaos and death playing out every single day in Iraq.

Sure, the “truth” is “finally out.” Nope, there weren’t any WMDs. And nope, Saddam had nothing to do with 9/11. And yes, those troubling details are often treated as if they weren’t known until it was already too late. But too many asked too little as they eagerly “handled” the Administration’s press releases and left specious claims unchallenged.

Now, those mistakes are compounded daily as the mainstream media ignores the price paid by Iraqis and the toll yet to be exacted on future generations. Nor has the blatherati been bothered by the way Obama quickly said, “Move along, there is nothing to see here.”

The real baggage here—the heavy historical baggage—is not simply the few “personal belongings” left behind on Air Force One by George and his band of Neo-Con artists. Rather, it is an ongoing indictment of America as a nation. Something we will carry for a long, long time.

Like all wars of aggression, the nation that marches into folly behind a demagogue, a tyrant or a salesman must also be accountable. But in the case of Iraq, like Vietnam before it, the media, the political establishment and many Americans cannot wait to let the past fade like America’s signature on the Geneva Conventions.

So, keep this in mind when pundits and prognosticators discount the likelihood of another Bush presidency. If the last fifty years have proven anything, it’s that there is no amount of baggage that cannot be buried deep into the dark recesses of American history.