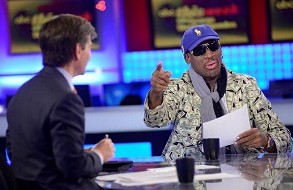 There are many revolving doors in Washington, D.C.

That door is marked: “the media.”

Most become pundits, commentators and experts—the denizens of America’s blatherati.

It’s the easy way in and out, because you don’t have to pretend. You just keep on regurgitating talking points and, hopefully, you’ll score a few consulting gigs to help keep the kids in Sidwell Friends or to keep on receiving an annual invite to CPAC.

Both FOX and MSNBC provide important holding pens for some of these animals until they get invited back inside the corridors of power.

But an intrepid few actually try to navigate the door between politics and journalism. George Stephanpoulos is one of them.

Like most who go through that door—either into government from journalism or into journalism from government—George had to take an oath: The Hypocritic Oath.

The Oath sounds familiar: “First, do no harm”—to your friends, your colleagues, your access and your long-term status as an insider. In other words, don’t “drop bombs” on your dinner plate.

His strict adherence to Washington’s all-encompassing oath was on full display when Dennis Rodman, fresh off of his quirky visit to North Korea, went on This Week with George Stephanopoulos.

And oh boy, did George go after Rodman, slamming him with “tough questions” about Dennis cozying up to a vile dictator who put thousands of his own people in prison camps. George, the ever-prepared political hack turned news personality, even waved a copy of a report by Human Rights Watch at the jovial, cartoon-like Rodman.

Although Rodman countered with “we do the same thing here,” he wasn’t prepared to wave a copy of a report by the same Human Rights Watch on the world’s largest prison population right here in the U.S.A., or to talk about the privatization of American prisons and the “injustices” that keep ’em filled.

Why was he unprepared? Because he’s Dennis Rodman!

Sporting prodigious sunglasses, a colorful array of painted fingernails and more piercings than an artisanal pickle-making convention in Portland, the flamboyant Rodman simply laughed off most of Boyish George’s charges.

Rodman has always been an interesting mix of self-aggrandizement and sincerity, but the way Stephanopoulos went at him exposed far more about George than it did about Dennis or the young leader of the bizarre regime in Pyongyang.

Perhaps the vertically-challenged mop-top simply couldn’t pass up his first and only opportunity to slam dunk over someone of Rodman’s stature. He shot repeatedly, but no points were scored. Although the “stature” of the two seemed strangely more equal as the interview wore on.

The stark reality of these “hard-hitting” questions stood out in bas relief—an example of exactly what George wouldn’t do if he was one-on-one with an actual policymaker, or a person with real power and real impact on the real world.

Rodman and North Korea are easy targets for Boyish George’s journalist chops, such as they are, but if Stephanopoulos really wants to sink his baby teeth into the hard work of journalism, he has two glaring targets of opportunity: ask Secretary of State John Kerry about his visit to Saudi Arabia and President Obama about his upcoming visit to Israel.

Like he did with Rodman, he can use Human Rights Watch reporting on the excesses and abundant abuses of those regimes. Alas, Saudi Arabia and Israel are two of America’s strongest allies, most reliable consumers of US-made weapons and, in the mainstream media, practically untouchable geopolitical partners.

Imagine journalist George asking Kerry about cozying up to a dictatorship that executes people for witchcraft, has an abysmal, Taliban-like record on women’s rights, has been a decades-long source of funds for terrorists, an exporter of jihadism around the world and engages in various types of human trafficking.

Either before or after Obama’s trip, George could ask about Israel’s violation of the Geneva Convention on settlements, deplorable conditions in the de facto prison camp of Gaza, its long-standing practice of incarcerating Palestinian children, use of food aid as a weapon, growing racial backlash against African refugees or its questionable sterilization policy.

Unlike Rodman’s “peace, love and understanding basketball” tour of North Korea—the decades-long relationships with both the Saudis and the Israelis have actual domestic consequences for the people who live in those countries, in the Middle East generally and, based on recent history, Americans who serve in the US military.

If Stephanopoulos really wants to be taken seriously as a “journalist,” he should seriously and directly take on CIA Director-to-be John Brennan on real issues, like the nuclear double-standard that punishes Iran for (supposedly) pursuing nukes, while Israel’s pseudo-secret nukes are never mentioned.

That’s one shot that gets blocked before it’s ever taken.

Perhaps that’s not surprising for a nation armed with the world’s most-powerful nuclear arsenal—the only nation to not only use nuclear weapons, but also to use them on civilian populations. Purveyors of American hypocrisy are rarely challenged the way Stephanopoulos challenged Dennis Rodman.

But, then again, hypocrisy is the lubricant that keeps the revolving doors “in” and “out” and “within” the Beltway spinning so efficiently.

'This Week in Hypocrisy with George Stephanopoulos' have 6 comments