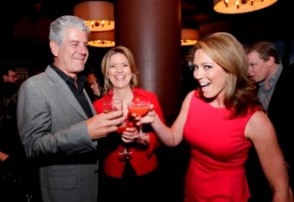 What is new is the incredible, monomaniacal programming mantra that has taken over CNN—the ever-more inane and dementia-addled granddaddy of the 24-hour news business.

Their unwillingness to let go, cut away or—perish the thought—actually cover a wide array of “news” stories, first manifested itself during the infamous coverage of the Carnival Cruise “Poop Ship.”

Roundly criticized as the ignominious beginning of the ill-fated Jeff Zucker Era, CNN’s wall-to-wall coverage of a stinky ship being towed to port looked a lot like it had finally “jumped the shark.” In other words, it had totally run out of ideas and was simply bereft enough to willingly engage in a sort of stunt-based stupidity that actually signals the coming of the end. That’s what happened when “Happy Days” decided to have The Fonz literally jump a shark in a bizarre storyline that, as the lore goes, signaled the effective end of the Happy Days premise.

But that’s not what happened with CNN.

Jeff Zucker and Co. are not jumping sharks. They are sharks.

The crime happened on Tax Day. Now May Day has passed. And there is Brooke Baldwin—still standing in front of the flowers and signs and accoutrements of mourning—hosting the “news” from the site of a story that literally ended weeks ago.

There is Brooke Baldwin finally segueing from hours of incessant blathering about the “latest in the Boston Bombings” to give viewers the latest developments in the arrest of—wait for it—Reese Witherspoon.

And there is CNN, like a hungry shark patrolling the feeding-rich waters of a blood-soaked tragedy, its teeth locked down on the sparse remains of a decomposing body…squeezing it and cajoling it for every last drop of coverage.

It is neither helpful nor informative. It has been so bad that CNN’s error-filled coverage of the events as they happened actually became a running joke…one that ran all the way up to the President and his hilarious riffs on its mistakes at the White House Correspondents’ Dinner.

Now that the events have passed, staying at the scene of its own crimes against the practice of journalism is crass, manipulative and shameful.

FOX News doesn’t have its hosts there. They moved back into the studio quickly after the memorials and even spend some airtime on other stories. In a bizarre twist, they’ve exercised the most restraint in light of the temptation to go 24-7 and continually scroll pictures of the Tsarnaev brothers against an ominous red and black “Boston Bombing” graphic.

MSNBC doesn’t have its hosts there. In a reasonable compromise, they did leave reporter Michael Isikoff in Boston to log periodic reports. But, by and large, they are back to their usual array of opinionistas, counter-FOX shock troops and hosts who seem to always be yelling at us. Do you ever get the feeling that Al Sharpton thinks viewers are partially deaf and mentally slow?

Unlike CNN, Tweedledum and Tweedledee don’t have their big personalities standing in front of a memorial, waiting for minor developments and incremental bits of information to chum the water. Only CNN remains there, hopelessly failing to justify itself and its bizarre transformation into infotainment.

Still, Zucker was brought in to pump up the ratings, and he can claim that he is just giving the people what they want. When he hitched his anchors to the Poop Ship, the media “elite” responded with predictable despondency about the sad state of the American public.

Here’s a news-flash: A “blame the viewer” orthodoxy reigns supreme in newsrooms around the country.

The decision-makers and number crunchers blame the public for the low quality of news programming. To them, the ratings are the Alpha and the Omega. Long gone are the days of news as a public service that secures an FCC license. No, now it’s about pulling numbers in key demographics. And profits.

So, when the numbers came in on twelve hours of non-stop Poop Ship coverage and showed a 50% increase in viewership, you could almost hear the collective “I told you so” come from plush executive suites in New York and D.C.

But the numbers are not as good as it sounds. Here they are, from Brian Stelter’s industry-read Media Decoder column in the New York Times:

At noon on Thursday, CNN started covering the ship to the exclusion of most other stories. For the whole day CNN had an average of 632,000 viewers watching at any given time, up about 50 percent versus typical Thursdays this year. MSNBC had 535,000, down slightly. Fox News remained on top with 1.38 million, up slightly.

CNN’s “huge,” 50% Poop Ship spike increased their viewership to 632,000 viewers. That’s it? In a nation of 312 million people? You could run a show on The History Channel titled “Hitler’s Lower Intestine” and you’d pull more viewers than CNN did with their bizarre coverage of the cruise ship. And that “spike” also means CNN normally pulls 316,000 viewers on a Thursday.

Really, look at all of those cable numbers and match those against the total population of the United States. It is not troubling how many people are watching FOX or MSNBC or wasting valuable nap time on CNN—it is staggering to see how few people are watching cable news.

But still we get the same tripe, warmed over and served again and again by executives who say they are “just giving the people what they want.”

It’s a claim that ignores the amazing, long-term success of 60 Minutes. It ignores the public’s historically low opinion and trust numbers. And it totally discounts the responsibility of so-called journalists and news directors and news organizations to exert news judgment and journalistic ethics as they engage in the endeavor of reporting news.

And it shows an inability to see the biggest news of all—that people are fleeing the cable and broadcast media and its carnival barking personalities to find news and information in a series of tubes and wires called “the internet.”

Perhaps that’s best news of all—that people are turning away from CNN in droves.

But, like the shark, it will keep on swimming and swimming in the chum-filled waters of tragedy, playing up the drama…until there’s nothing left to eat and it finally stops. And we all know what happens to a shark that stops swimming.