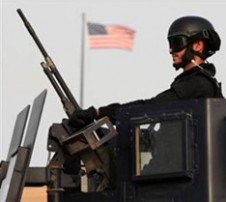 Warnings were given and embassies closed.

The media dutifully regurgitated and the conversation changed.

Frankly, when it comes to justifying the national security state, “potential terror” is almost as good as actual terror. In some ways, it’s better. It keeps Americans on their toes and critics on their heels, but without any unpleasant details. And that detail-free approach has worked quite effectively for well over a decade.

Put bluntly, the War on Terror has been predicated on blind trust.

However, some troublesome facts have disrupted that once-reliable Catch-22.

It’s not just Edward Snowden’s revelatory details about the NSA’s massive, extra-constitutional surveillance infrastructure. And it’s not just that DNI James Clapper lied to Congress. Or that the President and key members of Congress keep lying to the public. Now newly-released documents show the NSA went so far as to violate orders issued by the ultra-secret rubber-stamping FISA court. Even worse, other governmental agencies covet the NSA’s epic haul of data and, if the DEA’s “Special Operations Division” is any indication, the collection of everything possible can easily metastasize into a massive, classified law enforcement crackdown on the beleaguered denizens of “The Homeland.”

So, after decades of acting with impunity under a veil of relative obscurity, the beating heart of the national security state—the NSA—is enduring an unprecedented level of public scrutiny. Now the “just trust us” phase of the War on Terror is in real jeopardy.

Questions about the veracity and timing of seemingly convenient terror alerts reflect this new reality. Americans know the NSA never “met-a-data” it didn’t like to collect. And their Homeland Security “partners” in the ever-vigilant FBI not only seem to be forcing a merger with the telecom industry, but they’ve also employed hackers who could easily turn your snazzy new TV into a two-way observation mirror.

However, the national security state is so much more than just the data hounds in the NSA, the FBI and the DEA. It is the Pentagon, the National Security Council, the CIA, self-interested members of Congress, military contractors, defense lobbyists, oil executives, public intellectuals and the smarmy think tanks that harbor them.

They are the purveyors of perpetual war, and they have been ever since Senator Arthur Vandenberg infamously told a myopic, compliant haberdasher from Missouri that he’d have to “scare the hell out of the American people” if he wanted to engage in a multi-generational conflict with former allies in the Soviet Union.

On March 12, 1947, “Give ’em Hell Harry” did just that. He gave the “Truman Doctrine” speech that set in motion decades of proxy wars, the scourge of McCarthyism and the still-resonant debacle of Vietnam. In it he warned of an enemy that relied “upon terror and oppression, a controlled press and radio; fixed elections, and the suppression of personal freedoms.”

It worked. Three years later, on April 14, 1950, the National Security Council codified the multi-generational conflict in a top-secret, innocuously-named “NSC-68” report outlining the strategy of “containment.” That document was the exclamation point at the end of the Cold War sentence written by Truman and the nascent national security state when they dropped the atomic bombs on Japanese civilians.

Then as now, timing is everything.

Although the Japanese signaled their willingness to surrender, Truman and Co. knew the Soviets were coming—ready to turn their victorious army toward their long-standing Japanese competitors in East Asia. Wary of a Soviet presence in America’s growing sphere of influence, the national security state used the devastating attacks on Hiroshima and Nagasaki as a well-timed demonstration of force to the Soviets and the world. They certainly did nothing to keep the Emperor off the throne, which had been the supposed sticking point keeping the Allies from accepting Japan’s surrender before its civilians were summarily incinerated.

Ironically, it’s been 68 years since the US became the first and only nation to ever use nuclear weapons. Not ironically, it is still the national security state and the mantra of “national security” that trumps everything in American life and politics and business.

That one phrase classifies anything and justifies everything. It answers all questions and ends all discussions. It is the top secret that keeps the secrets of those at the top. That’s what “national security” is and has been—the fail-safe redoubt for a profitable shadow government of elite bureaucrats, military contractors, political salespeople and intelligence interlopers.

“National security” is also why al-Qaeda will never die.

Like the Soviet Union and communism before it, al-Qaeda is the perfect foil as “terror” incarnate. It is the nefarious leader of an international network of terrorists bent on destroying America simply because it hates the American Way of life.

Unlike the Soviet Union, it will be virtually impossible to trust or verify its demise. No matter how many “suspects” are killed or top leaders are felled, these non-state actors will never leave the stage. The mere presence of American power on their soil, hovering in their skies or simply operating behind their scenes will create an endless supply of individual enemies, ad hoc organizations and insurgencies against US-backed regimes.

And now that Osama bin Laden is gone, the national security state fights enemies it refuses to name. It deploys “suspected drones” to kill “suspected militants” and “suspected al-Qaeda” in Yemen, Pakistan or anywhere “affiliates” and “associates” and “al-Qaeda-linked” groups may pop up. Since drone strikes kill ten times as many civilians than do piloted airstrikes, they will pop up in perpetuity. And America’s global empire of bases, clients and far-flung “national” interests will forever expose Americans to potential harm and inspire domestic fear.

Perhaps the greatest irony is that this latest cocktail of fear and trust is being served at the same time the President criticizes Russia for “slipping back” into Cold War thinking.