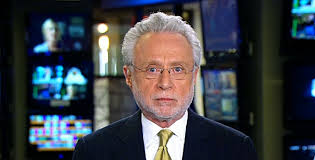 Wolf Goddamn Blitzer. One annoying hack, added liberally to a stew of almost-news on CNN,

CNN–the network that brought you an exclusive interview between Larry King of Starf*cking and Paris Hilton and, in turn, gave your the “Breaking News” headline “Paris is Now Boring.”

Or yesterday…on the whatever-his-name-is Pro Wrestler who killed his wife, his son and, in his one act of good taste, himself. Whatever…I’m just sick oh hearing about it.

The over-enunciating stand-in for Nancy dis-Grace actually said that it was now more tragic that the dude killed his son since the boy may not have been slightly retarded…more tragic that he may have killed a “normal child.”

Holy Christ! Where do they get these “people?”

Anyway…Wolf is the worst kind of pseudo-journalist. A poseur. A posed brown nose buried up the collective ass of the DC political elite.

See, there was a time when reporters…even on TV…were adversarial. Truly adversarial. Asking hard questions. Attacking those political snakes in the grass who must be attacked to keep them honest.

But now…hacks like Wolf are so intertwined with those they cover, it is now necessary for us…for the people…to attack them! Because they attack us and those who try to do the job the media is paid to not do.

Not my favorite doco filmmaker. But he often makes great points…until he goes over the line. Like hounding Chuck Heston when he obviously suffered from Alzheimer’s.

But I saw Sicko. It rocked. It was spot on…until he went over the line in Cuba having a painfully staged.ceremony with firefighters. Whatever…he made the point in Cuba with 9/11 responders getting healthcare they can’t get in the home of the heroes–America!

Hey, dudes…we are all getting screwed. Repeatedly.

So, I was gleeful when Moore went off on Wolf’s show…because it is a show, not a news program…and bit back after a introductory hit piece that was certain to please the pharmaceutical and health insurance companies who advertise on CNN. Because the linchpin holding together the criminal system we live in…that is getting worse daily and is far worse than you could imagine (really, it even makes me wonder if I can be pessimistic enough to keep up with the system)…that linchpin is the corporate media.

Corrupt to the core. And information is all we’ve got…and we ain’t getting it.

'Wolf Gets Blitzered' has no comments